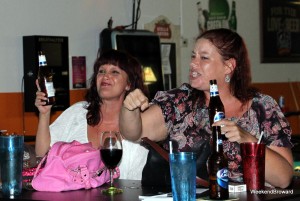 Part 1 of 3 in a series focusing Karaoke Contests

Most people tend to think of karaoke as just silly fun, something to do when you’re intoxicated & feeling inhibition free. There are innocent auditors who enjoy being part of the discerning audience yet occasionally end up performing themselves and there are the ‘regulars’ who are hooked on harmonizing every week. Whether it’s a girls’ night out, a date or a means to master your modulation out of the shower, it is a genuine form of entertainment.

Some entertainment is purely a leisure activity, and although karaoke is generally in this category, it can also be a competition. The first of my 3 part Blog Series on Karaoke Competitions focuses on a couple of people who have periodically participated and prospered at singing for sport.

Eldred Williams is a continuous contender – he has tried and triumphed many times in karaoke contests. I spoke with him and Mark Wright, another frequent flyer, recently about their trials and tribulations when it comes to chorally competing.

CS: How long have you been entering karaoke competitions? How many have you won?

Eldred: I’ve been entering singing contests since I found them here in Florida 20 years ago and I think I’m maybe at 50% in winning contests.

Mark: Since 1995 when I returned from Germany where I was stationed in the Army. I’ve been in close to 20 and won about a third of them.

is your main REASON for doing them? Was it more for the prizes or the love of performing?

Eldred: I do it solely for the love of music. If I can touch someone, that makes it better.

Mark: I wanted to still be involved in music even though I was no longer part of a band. I don’t enjoy the competitive part, I just enjoy great singers. And I wanted to keep my voice sharp – you either use it or you lose it.

Mark: Surprising people with my song choices that they never expect me to do.

CS: Do you ever get dressed up

for a contest to cater to an audience?

Eldred: I try and dress for the occasion, sometimes appearance is points. I’ve never worn a costume though; I want people to judge me for my voice.

CS: What is your main reason for not going back to a particular venue to participate a second time?

Eldred: I don’t do crowd participation contests, I see the worst participants win those. I’ve done one contest recently, and after I saw the results there was no way I was coming back even though the prize was so big.

Mark: When the worst singer wins just because of their gender or their body instead of their talent.

CS: What advice would you give someone who is interested in entering a karaoke contest?

Eldred: My biggest advice to people is don’t sing songs because you love them. Sing songs that will touch the crowds. Look at your atmosphere, where are you. Don’t be afraid to take risk, making a song your own helps a lot. Showmanship, bring people into your song and mainly, don’t take it too seriously. Music is fun and life, enjoy and learn.

Mark: Be careful with your song choice. I know that everyone says that, but it is true. And don’t just sing the song, own the song.

As you can see, singing contests are like most things in life, not always fair. They also aren’t a requirement, so if you choose to enter one, like Eldred said, ‘don’t take it too seriously.’ Have fun with it. To quote the title of my first karaoke blog from over a year ago: “It’s not American Idol”.