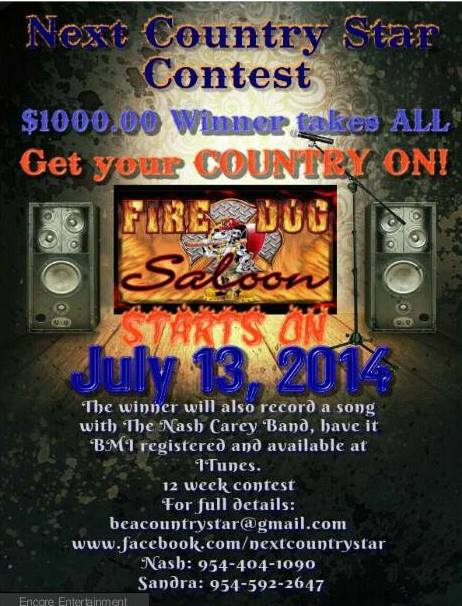 Encore Entertainment has produced a new local competition for current and aspiring singers who would like to take their hobby or career to a new level. This 12 week competition combines some of the elements of well-known television shows such as The Voice & American Idol but limit the music genre to Country Music. Blind judging, as well as audience votes, will determine who moves forward in the competition. Like the infamous television shows, judges will comment on each participant’s performance. Most of the “Celebrity” judges have been chosen from the local music industry so this contest turns the tables on those who normally would be on stage performing. Judges will not be able to see who they are listening to until the semi-final round comes along, so a good ear is essential for the right contestant to be chosen. Some may think of this as a Karaoke contest due to the presence of a karaoke monitor but it will be used only to show the starting point of the song and any instrumental solo’s. Contestants must memorize the songs which they will be performing. The grand prize winner will take home $1000.00 in cash, an offer to write, record and perform a song live with the Nash Carey Band. The song will be registered with BMI and available for distribution via iTunes. “Next Country Star” is open to any unsigned individual who can sing, 18 years of age and over. “This is a chance for someone to really not only get noticed but to take an active role in Writing, Recording, Registering and Live performing with The Nash Carey Band all with a cool $1000 in their pockets.” says Nash Carey when asked about the competition.

The competition takes place every Sunday night at 9pm and runs for 12 weeks in a row, beginning July 13th and ending with the winner chosen on September 28th. Two Semi-Final rounds will give 18 singers from the 9 week preliminaries a chance to make it into the finals. You can also expect a few surprises in performance requirements along the way and the Finals will include contestants singing competition songs with a live band instead of pre-recorded music.

Interested participants are asked to complete a short registration form and submit $10.00 to enter the contest. Here are the registration options to obtain the Rules/Registration packet:

1) Email beacountrystar@gmail.com and ask for the Next Country Star Rules and Registration packet.
2) Print one from the Facebook links below
3) If slots are still available, interested participants who
have not pre-registered will be allowed to enter the contest before 8pm.

Admission to friends, family and anyone just interested in watching the contest is free and encouraged!