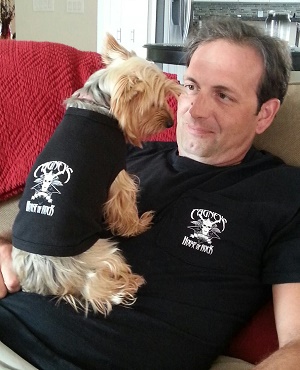 This karaoke blog is dedicated to Stephen Lembach, who worked at Cagney’s Saloon in Davie and tragically passed away on February 23rd. If you ask anyone who knew or even came in contact with Steve, they would all agree that he was friendly to everyone and always greeted you with a smile. This beloved bar-back was also a seasoned karaoke veteran. At Cagney’s, he would take the stage almost every Wednesday night for karaoke hosted by Thais. Last August I interviewed some karaoke singers and I was lucky enough to speak with Steve for quite awhile, learning about his lounge life in Las Vegas where he sung up a storm. I had only known him as a ‘hi’ and ‘bye’ acquaintance before that and his story was very interesting. I was surprised to learn that he had been performing in public for over 20 years. Although he enjoyed engaging in musical theater in high school, he said he was scared to death the first time he tried karaoke. As it turned out, he went from a semi-shy serenader to participating (and running!) contests for over 5 years, sometimes even paying the rent with his warbling winnings. I asked some people close to Steve to tell me a little bit about their experiences with this skillful singer. Here are a few somewhat teary but telling testimonials to Steve and his pleasing pipes & personality.

Steve is proof that a genuine person could be someone you least expect, a stranger at a store or someone who picks up your empty wine glass at the end of the night. And real choral capability is not always measured by a record deal or fame. There are tons of talented troubadours just like Steve exercising their esophagus at your neighborhood watering hole. So the next time you feel too introverted to indulge, remember that a once shy Steve admitted that ‘once I would get up and sing, it was such a rush that I got addicted’. This could be your rewarding release as well, although there will only be one “Sincity Steveo” and he will be immensely missed by many.