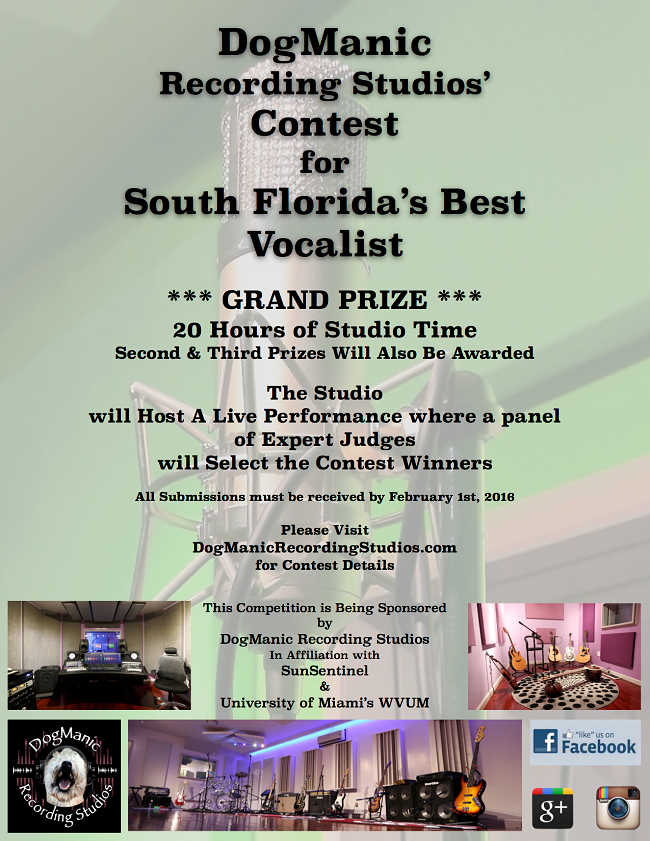 DogManic Recording Studios has always been driven to give something back to the local music scene.  Their Vocal Contest specifically set out to give local vocalists an opportunity to shine in front of industry professionals as well as provide them with valuable studio time helping them enhance their careers.  After extending the deadline to February 1st, the Studio received more than 70 submissions from local artists looking to showcase their talent and take their careers to the next level.  DogManic Recording Studios extends a warm thank you to all the Artists who took the time to submit and wish them the best of luck in their musical careers.

As of February 10th, preliminary judges have narrowed all the entries down to the following 10 finalists:

Contestants will meet the judges and management of DogManic Recording Studios face to face at an in-studio sing-off on February 21st.  According to studio owner Christian Solazzo, “The finalists may be diverse in their genres, but all of them have shown us some exceptional talent and drive which should make for a very exciting finale!”

Judges Talia Medina, Alex Faron and Rachel Klein will ultimately decide the 1st,2nd & 3rd place winners.  As the Sun Sentinel‘s Nightlife reporter, Talia Medina can judge contestants against all the music she hears in her field work. On top of that, she was the youngest member to sing in the Philharmonic Children’s Youth Choral, where she starred in The Sound of Music as an alto. WVUM 90.5’s Local Music DJ, Alex “Far Out” Faron can judge contestants against the backdrop of the local music he spins. On top of that, he’s an accomplished guitar player and majors in Audio Engineering.  Vocal teacher and Broadway Performer, Rachel Klein can judge contestants against all the performers she’s trained and sang alongside. In her theatre career, Rachel has lived in Israel when she played the Gypsy in the play “Gypsy” which was staged at the Tel-Aviv Opera House.

Because our judges come from different quarters of the music industry, the winner they agree upon will have mass appeal. If judges from the press, radio and live theatre support our winner, the casual listener who hears their music online will as well! First place winner will be awarded 20 studio hours. Second and third place finishers will get 8 hours and 4 hours respectively.