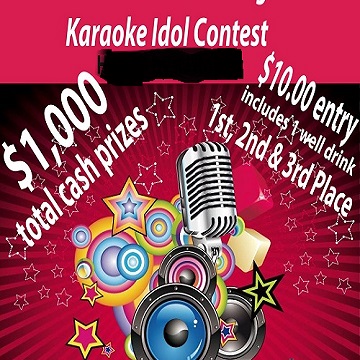 Karaoke Contests are usually thought of as a good thing. It’s an ‘event’ instead of a regular karaoke night. It brings in more people and there is the excitement of competition, not to mention cash prizes. But the age old question starts singing in my ear: “Can there be too much of a good thing?

Let’s start with the positives: karaoke contests are, indeed, fun. They are entertaining to watch, especially since they usually bring out more personality in the person on stage. The crooner ‘crows’, so to speak, by showing what they can do, this time not just for the crowd, but for the judges. Sometimes the performer will pile it on, like venturing out into the audience and approaching particular people to sing to. Colorful (and sometimes cartoonish) costumes are also intriguing indulgences for eager eyes during a competition. Maybe a mini-skirt with fringe for Tina Turner’s “Proud Mary” or a cowboy hat & boots for a Garth Brooks tune. Regular karaoke nights can also be slow at times. Depending on anything from climate conditions to weeknight work worry (concern that you’ll rise instead of hit the snooze the next day) to even the availability of a babysitter. But these contests seem to bring out the ‘party’ in people. Habitual homebody’s will come out to witness the wacky but whimsical wonder of a live sing-off. Even the familiar faces that have tired of taking to the stage will show up for the purpose of provocatively performing for prizes. 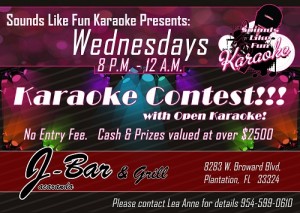 But what if the contest never ends? Or at least doesn’t seem to. Some bars have nightly prizes but the winner is placed into the “Finals” which doesn’t occur for weeks, sometimes months! I understand the ultimate endgame for this is to divvy up as many divas as possible so the big Finals are a huge show. There is nothing wrong with that reasoning, but I think if a bar has only one karaoke night a week, that is much too long. People

who qualify in the first few weeks have a long time to wait, but that is not the perpetual problem with this program. What about people who want to sing but don’t want to compete? They have to wait a month or two until they can sing on karaoke night at their favorite bar? Unless the favored venue allows some time before the contest starts (which is not a sure thing), then they have to just take a break until the contest ends weeks later or just become serial spectators? 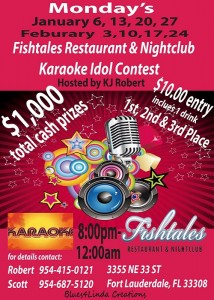 Contests can be crammed down our throats, even if you enjoy them. I love a good karaoke competition myself, but some places that hold them don’t know when to quit. I’m all for making a buck, but when a bar realizes the magnitude of a mosh pit they can corral for a contest, they can go overboard. Some places finish a contest that is already 60 days long and instantly start another one! I say give people a chance to get back to the regular karaoke nights for awhile. Give them time to appreciate the difference and anticipate the excitement of the next challenge. There’s a reason that Mark Twain said that too much of anything is bad. The Final verdict? Karaoke Contests are a great diversion, but don’t forget to return to the regular course.

2 thoughts on “The Contest Conundrum”