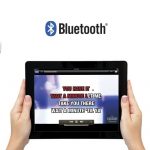 Based on the segment that has become a global, viral sensation on THE LATE LATE SHOW WITH JAMES CORDEN, CARPOOL KARAOKE has generated over 2 billion views and features celebrities riding along and singing along to their favorite songs with James Corden. Due to its popularity, the segment launched a stand-alone show which was picked up as one of the first original content series on Apple TV, now in its second season.

Gary Atkinson, Singing Machine CEO, commented, “As the worldwide leader in home consumer karaoke products, we’re thrilled to be partnering with CBS Consumer Products and CARPOOL KARAOKE to be the first to deliver a line of products for use in the car that are in the spirit of CARPOOL KARAOKE’S fun and engaging brand.” Bernardo Melo, VP of Global Sales & Marketing, added, “CARPOOL KARAOKE is a global, viral brand that is all about the joy of music and singing.  We believe it’s the perfect complement to our Singing Machine brand and can’t wait to bring a unique twist to the CARPOOL KARAOKE universe.”

“From THE LATE LATE SHOW segments to the stand-alone series, CARPOOL KARAOKE is known and loved around the world,” said Veronica Hart, EVP, Global Franchise Management, CBS Consumer Products. “We’re thrilled to partner with Singing Machine to enable fans to personally experience the joy and fun of the show on their own – at home or while stuck in traffic with friends.”

Singing Machine will be debuting for the first time its new CARPOOL KARAOKE product at the upcoming New York Toy Fair on February 16-19, 2019 at the Jacob Javits Center in New York City. The Company will be featuring an interactive activation site where guests are invited to sit inside a car in the North Concourse of the Jacob Javits Center and experience Singing Machine’s debut CARPOOL KARAOKE product first-hand. The Company will also be taking appointments at its booth #6359.

The CARPOOL KARAOKE segment is the biggest viral video hit ever on late-night television, with over 2 billion views on YouTube since its inception. The #1 most-watched late-night clip on YouTube is a CARPOOL KARAOKE segment featuring Adele, which has racked up an astounding 192 million views. CARPOOL KARAOKE also has the second and third most-watched clips in the history of late night with Justin Bieber and One Direction, respectively. Other top stars, such as Paul McCartney, Elton John, Sia, Bruno Mars, Stevie Wonder and Jennifer Lopez have also appeared in the segment, as has First Lady Michelle Obama.

The popular CARPOOL KARAOKE will continue to be a recurring segment on THE LATE LATE SHOW WITH JAMES CORDEN, which is broadcast Monday through Friday on the CBS Television Network. Last year, the Apple series received an Emmy for best short form variety show.

About The Singing Machine

Based in the U.S., Singing Machine® is the North American leader in consumer karaoke products. The first to provide karaoke systems for home entertainment in the United States, the Company sells its products worldwide through major mass merchandisers and on-line retailers. We offer the industry’s widest line of at-home karaoke entertainment products, which allow consumers to find a machine that suits their needs and skill level. As the most recognized brand in karaoke, Singing Machine products incorporate the latest technology for singing practice, music listening, entertainment and social sharing. The Singing Machine provides consumers the best warranties in the industry and access to over 14,000 songs for streaming and download.  Singing Machine products are sold through most major retailers in North America and internationally. See www.singingmachine.com for more details.