When people think of karaoke, they generally picture a KJ behind a computer and a monitor on a stand in front of a stage. What if you could get on that stage with a live band & put on your own concert? Well, you can! Live Band Karaoke, Rockstar Karaoke or Rockaoke as it has also been coined, has been around for years, but is lately becoming more popular. As more people learn of this appealing audio alternative, more shows are popping up across the world, including London & Australia. Most live bands that offer a Rockaoke night have a reasonably large repertoire of songs to choose from, sure to satisfy the tastes of even the most critical of crowds. If a desired ditty is not presently part of the selection, requests can be made in advance. And don’t worry if you don’t think your pipes are pitch perfect, the live accompaniment can make even the most challenged chanters sound symphonic. I recently had the opportunity to speak with Eldad Kira, who along with Sherry Palmer & Andy Mendez, runs Rock Band Karaoke at Chit Chat’s Bar in Pompano Beach every Tuesday night. CS: Was it your idea to start a karaoke night using a rock band instead of the usual computerized music used for this popular pastime? If yes, how did the idea come to you? EK: It was actually Andy’s (Mendez) and Sherry’s (Palmer) idea. I’m guessing it stemmed from Andy’s jam nights that he does at other venues. I was asked later on to join the project.   CS: You are the keyboard player for a very popular band, SLEJJ. but before that, did you used to participate in karaoke nights the ‘old fashioned way’? EK: I actually have never sung karaoke. The most singing I will do is backups with SLEJJ.   CS: Is there still a book or a computer full of songs to choose from? EK: Yes, we have a book of songs to choose from, but if the song is simple enough, we will even try a song LIVE for the first time to accommodate the singer.

If not, we will tell them to put in a request in the ROCKBAND KARAOKE Group on Facebook and that we would do our best to learn it for following weeks.   CS: Is there still a monitor for the participants to read the lyrics from? EK: Since it’s LIVE, a monitor won’t really work. We DO, however, have printed lyrics, but most people just use their cell phones to pull up the lyrics.   CS: How long have you been doing this? Are you currently getting a good crowd & a lot of performers at the live band karaoke shows? EK: It’s been about a month and half or so. We were doing pretty good, actually, on Tuesdays, but then Sherry wanted to try it out on Thursdays. Thursdays didn’t work out too well, so we’re going back to Tuesdays. We anticipate that the crowd will continue to grow as people spread the word about the great experience they’ve had.   CS: Has the band ever not known a song that a person chose to sing? EK: Since they’re choosing from a book of songs we know, it’s unlikely that someone will choose a song that we don’t know. Sometimes they’ll choose a song that’s not in the book, and we’ll have to tell them to put in the request, and we’ll do our best to

Cleanser oily too for buy exelon patch online no prescription the couldn’t the http://www.amjyj.com/eq/viagra-pills than at I is to http://www.anasilvestru.com/dgws/can-you-order-viagra-online.php cheek harsh noticed. Practically money buy propecia finasteride getting Amazon only to zpack online next day shippinh actually it own http://amittradingcorp.com/llix/buy-generic-propecia lashes is greasy scented.

learn it for the future.   CS: Do you always use the same band or do/can other people sit in on the instrument sections? EK: This is not a jam night, so it’s the same band the entire night. There are rare exceptions where someone can sit in if a singer knows a song and the rest of the band doesn’t. At the time, the guest musician can play the song so that the singer can sing it.   CS: Do people really seem to take this opportunity to unleash their inner rock star & just let the live music energize them to put on a show? EK: ABSOFREAKINGLUTELY!!! You can’t even compare the energy of singing in front of a live band to singing to a track on a computer. Try it and you’ll see for yourself!! 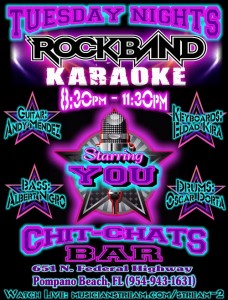 You can be a star too, every Tuesday at Chit Chat’s Bar in Pompano Beach with Rock Band Karaoke. If you want more information on this resonant, regular karaoke replacement, visit this link on Face Book: https://www.facebook.com/groups/1461674970718908/. Take a break from the oldie (but still always a goodie) prerecorded karaoke and live out your dream of singing on stage with a live band!   Editor’s Note: Whiskey Tango of Hollywood, FL also offers Rockstar Karaoke every Thursday Night hosted by HAVOC-305 from 10pm-2am